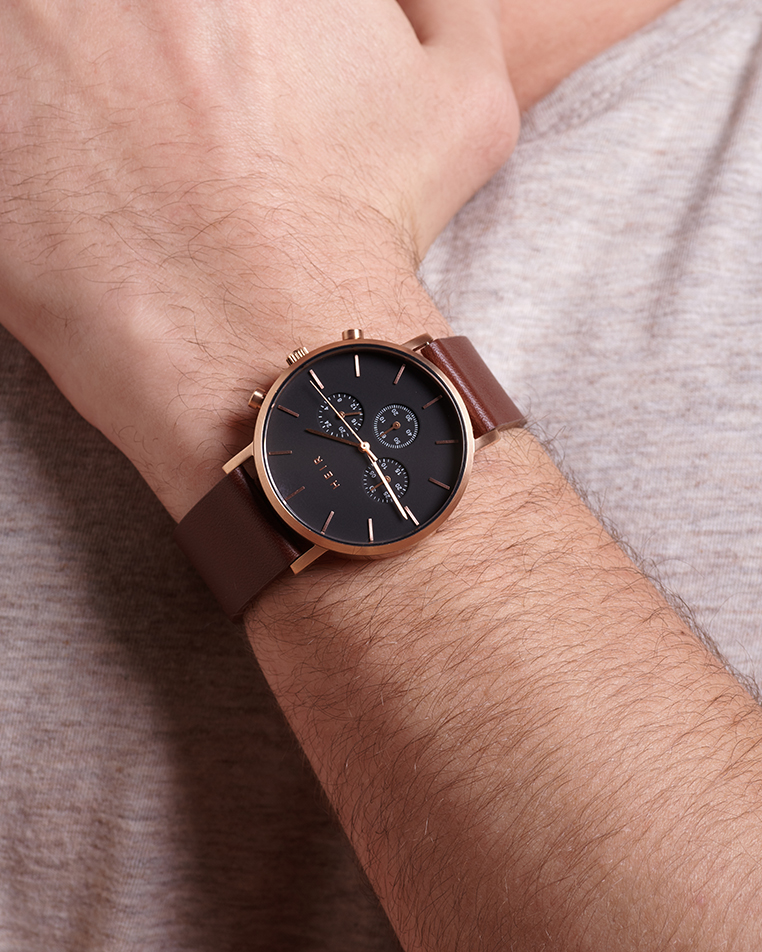 Talk about space travel, horse racing, aviation or automotive sport and the chronograph is bound to appear somewhere in that conversation. Their history is intertwined in more ways than just appearance (think about the dashboard in a space shuttle or a racing car) and for a device so complicated and fascinating yet so easy to read, the chronograph is one of the coolest gadgets that can don your wrist.

So what’s a chronograph?

Derived from the Greek words chronos (time) and graph (writer), it’s simply a watch with complications – extra features that turn it into a stopwatch with beautiful subdials, making it more functional for a variety of activities.

The subdials log the seconds, minutes and hours for the task or event you’re timing – whether you’re cooking a meal, running a marathon or racing a car.

Chronographs have a rich history and can be described as companions to adventure throughout history.

The very first chronograph was the ‘compteur de tierces’ built in 1816 by Louis Moinet for use with astrological equipment. By 1821, the French King Louis XVII was using a chronograph watch to record lap times for horse races and in 1844, a reset feature had been added, allowing the easy recording of successive measurements.

These chronographs were pocket watches, always tucked away after use and only changed in 1913 when the first chronograph wristwatches were made available.

The addition of more complicated functionality made them a staple for aviators, allowing pilots to calculate distance and speed repeatedly with precision.

The chronograph’s charm did not stop on the wrist. NASA astronaut Scott Carpenter, orbiting earth in the Aurora 7 in 1962 was the first person to take a wrist-worn chronograph into space. But then came 1969, that unforgettable year with two major events:

And then in 1970, a crew was saved from the jaws of death: Using a chronograph, astronauts on Apollo 13 were able to time critical engine burns that helped them steer back to earth safely when their spaceship faltered after an explosion.

And many more befitting milestones can be linked to the chronograph but more subtly, the elegance of a chronograph is always appropriate for a variety of styles – be it casual, sporty or if you’re a fan of James Bond then you can break the rules and make it an everyday watch that can even be worn with a suit.

The Heir chronograph collection features a dedicated subdial for a second time zone with a 24 hour display. This subdial, located on the right, is a delight for those who travel a lot for work, business, leisure or those with friends and loved ones in different time zones.

Another two subdials (the left and bottom middle) act as a stopwatch that can record time of up to 30 minutes, completing the Tri-compax (V-shaped) subdial design of our collection:

This collection delights in a minimalist approach that leaves the matte white dial uncluttered but still carries the sporty sophistication of a chronograph. It’s thick stainless steel casing is a cradle of strength and the sapphire coated flat crystal a symbol of clarity and longevity. The Chrono Noir edition brings out boldness in a black matte dial design to simultaneously portray elegance, inspiration and style.

Designed for casual or formal wear, this line of chronographs has an industrial look that evokes confidence in the complicated engineering embedded beneath the crystal clear sapphire glass. It’s a versatile design merging modernity and simplicity in a luxurious chronograph.